Marazzi Ceramiche was founded in 1935 in Sassuolo, in the province of Modena, in an industrial area dedicated since the 17th century to terracotta workshops. Leggi di più 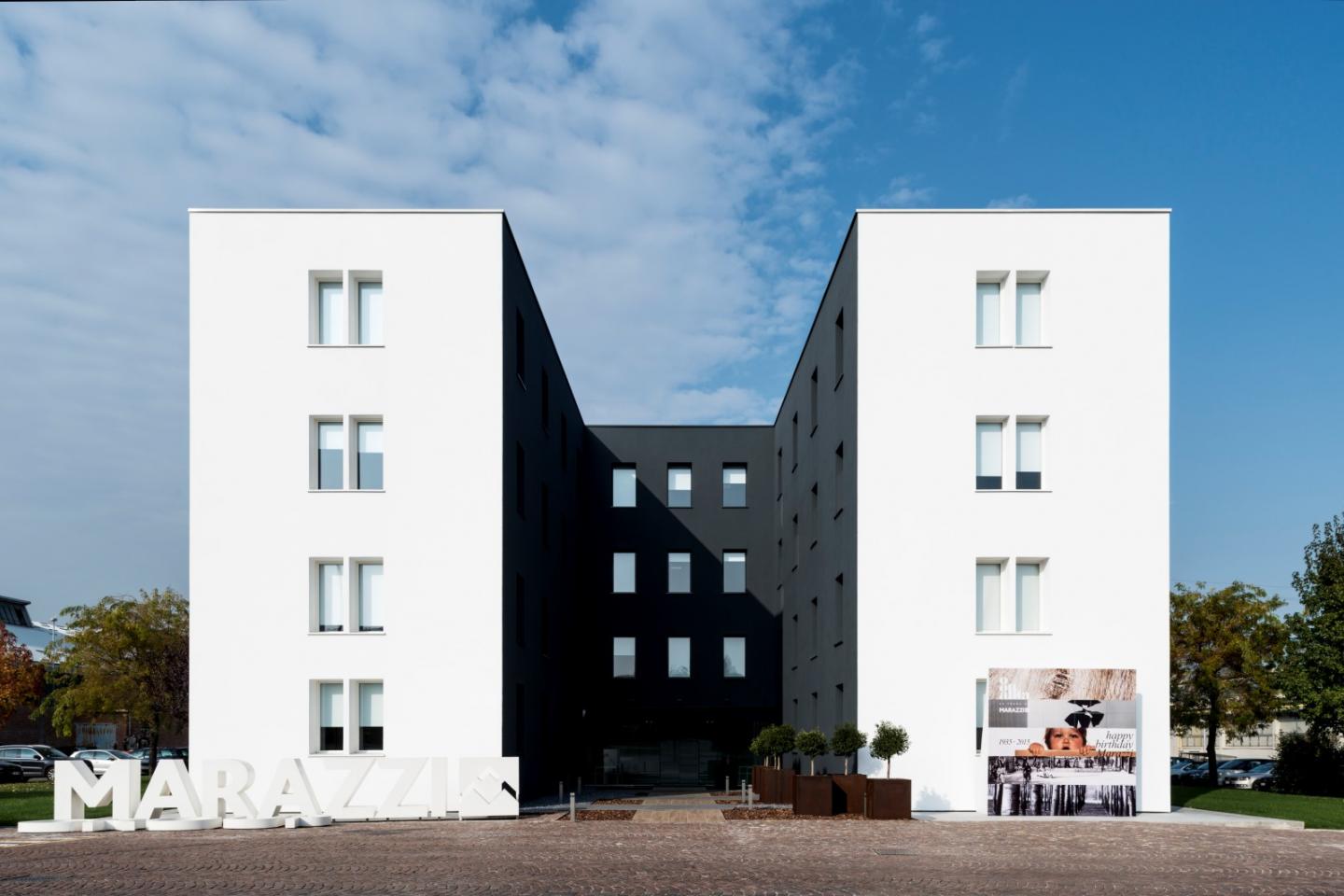 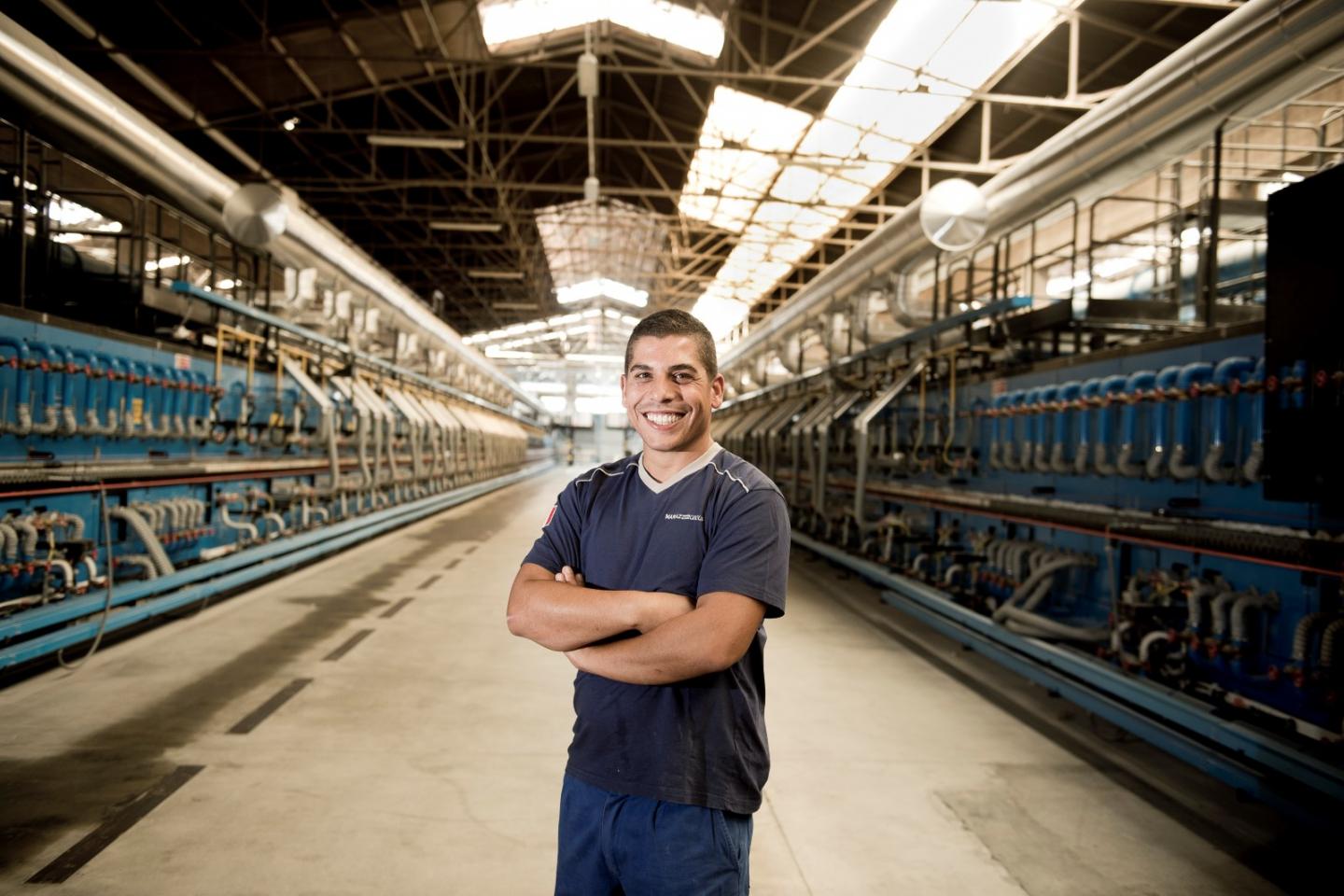 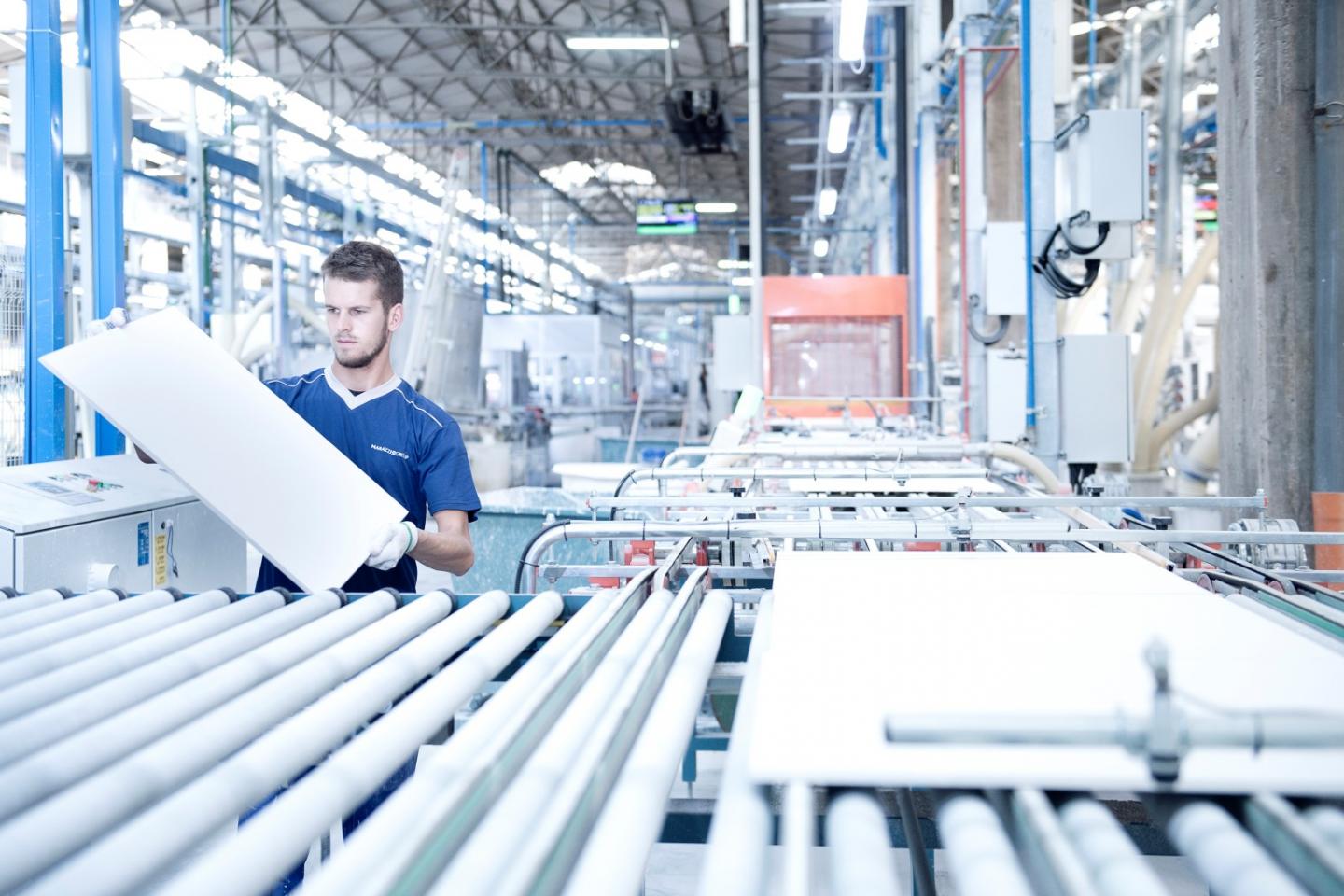 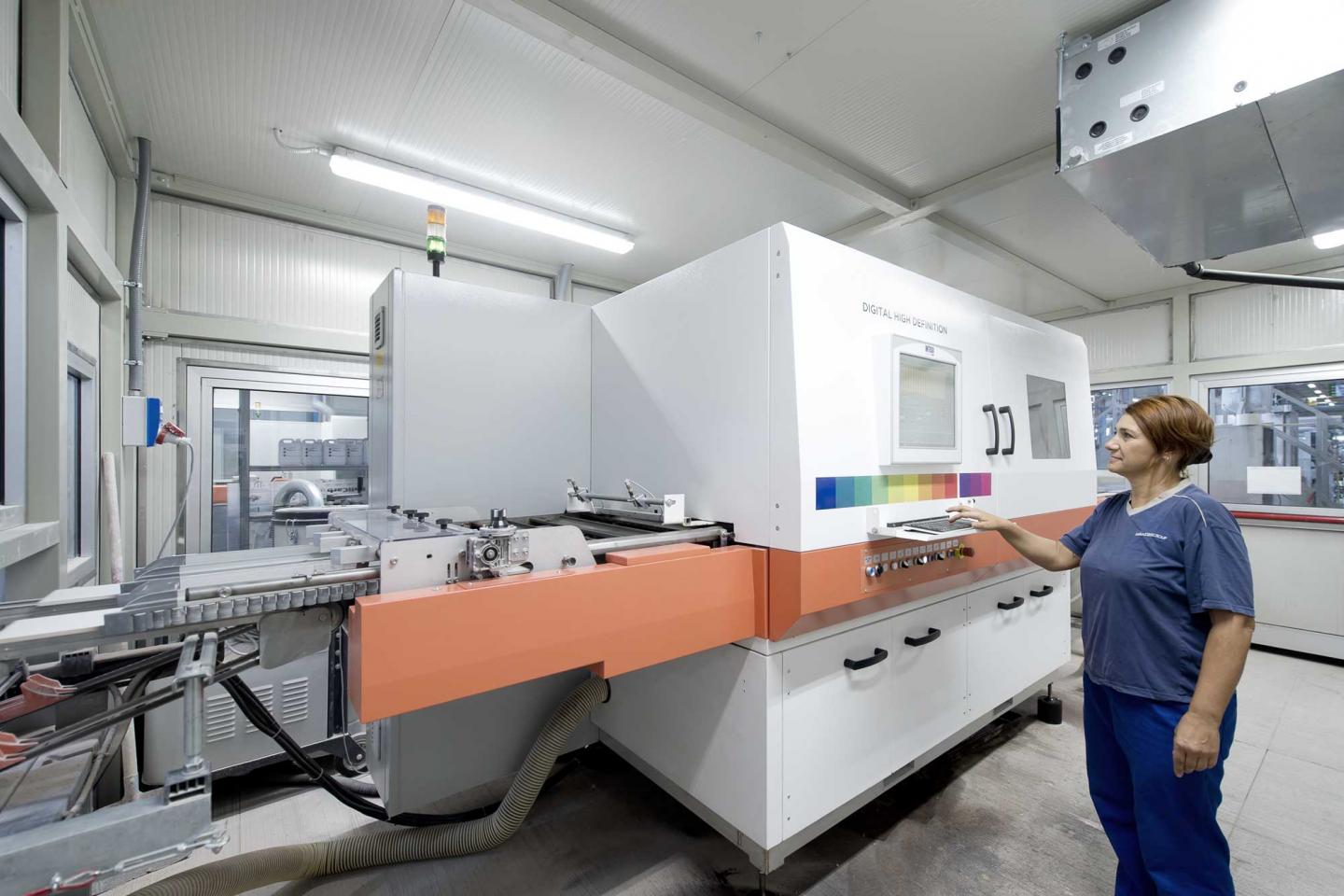 Marazzi Ceramiche was founded in 1935 in Sassuolo, in the province of Modena, in an industrial area dedicated since the 17th century to terracotta workshops.  It is said that the firm’s founder Filippo Marazzi built his first production plant using two parallel rows of poplar trees to support it, creating what was to become known as the “cardboard factory” due to its flimsy structure.  In reality, this was the inauguration of a company that, thanks to the use of the best technologies available at the time, was to transform the craft of clay processing into a modern industrial process, producing ceramic tiles with kilns and processes that were ahead of the curve for the time.

In the Forties, the company started working with Venerio Martini, painter and ceramist, to develop the aesthetics and decoration of the product, and continued to do so through the Fifties when the company, now headed up by Filippo's son Pietro, underwent its first major expansion in terms of size and mechanisation of production, thanks to large investments into new technologies and the search for innovative design solutions.
This expansion of its production enabled Marazzi to meet the increasing demand for ceramic tile during the post-war period.

The dialogue and collaboration with the world of architecture also goes back to this time: this was the period of the early work with architects Gio Ponti and Alberto Rosselli who designed the four-curve ceramic tile, with its polished surface in a variety of colours, presented for the first time at the International exhibition of modern decorative and industrial arts and modern architecture at the 1960 Milan Triennale, from which it was to take its name.

The Seventies were a milestone period for the growth of Marazzi, marking a radical evolution of ceramic tile both aesthetically and technologically.  Marazzi was once more a leader in these new developments, launching the Alta Moda collection in the early Seventies, which linked the ‘mattonella’ (brick) to the great names of Italian and international fashion. Ceramics and prestigious fabrics were born together of the creative brilliance of stylists like Biki, Paco Rabanne and Federico Forquet, sharing the same eclectic decorations and colours, as a first approach to the total look concept.
In the same period, Nino Caruso, internationally renowned artist and sculptor, designed the Marazzi Forme collection, the first example of the industrialisation of three dimensional ceramic modules, which completely superseded the division between floor and wall tiles to become 3D architectonic structures and furnishings.

Its vocation for innovation led Marazzi to take its first technological leap in 1974 with the patent for the fast single-firing process, which revolutionised the production of ceramic tiles and is now the most widely used process worldwide.
The fast, simultaneous firing of body and glaze in one cycle reduced production times from 24 hours to just 1 hour, thus dramatically increasing productivity while also radically reducing energy consumption. This was therefore the first example of ‘green’, more resistant and technical, but still finely decorated ceramics.
The first large size floor tiles (60x60 cm) were introduced in 1975.

In 1978 the management of the company passed to the son of Pietro Marazzi, Filippo, who oversaw its internationalisation, making the Group the largest ceramic manufacturer in the world, with a strategy of articulated growth, including the 1989 acquisition of Ceramiche Ragno, the second player in the Italian market and one of the architects, with Marazzi, of the growth and spread of Italian ceramics worldwide.
In the Eighties, thanks to its on-going research into new solutions, Marazzi continued to remain ahead of the curve with new technologies and styles. In 1985, the company patented Enduro, the first collection to boast increased hardness and durability, thus opening up new horizons for the use of ceramic tile.
In the same years, artists, designers and ceramists were invited to the ‘Il Crogiolo Marazzi’ design lab to work unfettered on new ideas.  This led to the “Sperimentazioni” collection by Roger Capron, the large ceramic panels - fully-fledged portraits of women - by Amleto Dalla Costa and numerous rakus designed by Setsuko Nagasawa.

At the same time, colour took on a new importance and independence: the result was collections of extraordinary chromatic range and brilliance, such as “I Colori Marazzi”.

Ceramic now left behind its vocation as an interior furnishing element and became a specialist product for contract work, including underground stations, airports and large shopping centres, as well as urban furnishing projects such as the Torre Arcobaleno (Rainbow Tower) in Milan, made with plain colour Marazzi ceramics to celebrate the 1990 FIFA World Cup held in Italy.   This period also saw a new attention to architectonic principles, with new ceramic solutions including ventilated curtain walls and raised floors.  Marazzi set up its “Tecnica” and Engineering Divisions at this time, to make solutions available to architects and designers looking to improve the comfort and energy performance of their buildings.

From 2000 onwards, Marazzi has been focusing on the manufacture of ceramic slabs, which are continuing to grow in size (now up to 75x150 cm) without sacrificing the very high performance of the materials, as well as on decoration.
The exclusive development of cutting edge digital technologies has enabled Marazzi to innovate its styles and aesthetics even further with greater faithfulness to the original materials, culminating in 2010 with the production of the first natural wood-look stoneware, Treverkhome, making the company the leader in this market segment as well as opening up new applications for Italian ceramic tiles, including floors and walls for spas, restaurants and boutique hotels.

In 2010, Marazzi registered the SistemA crystallised stoneware patent, which gives enormous brilliance and depth to the colours, accompanied by a major programme of investments in Italy and abroad to equip the Group with the most advanced and innovative technologies for producing porcelain stoneware and ceramic tiles.
In 2011, Soho, the first three-dimensional stoneware tile, received an Honourable Mention at the ADI [Italian Design Association] Compasso d’Oro awards - the most highly-prized accolade in the design sector - and was added to the Compasso d’Oro Award Historic Collection.
In 2013, Marazzi became a member of the Mohawk Industries Group, the flooring multinational listed on the New York Stock Exchange with head offices in Atlanta, Georgia (USA).

Marazzi is the ceramic tile industry's best known brand.  Present in more than 140 countries, it is universally recognised as synonymous with quality ceramic tiles, and symbolises the best of Italian style and manufacturing in the interior decoration and design sector.

An unfailing flair for research and experimentation, the ability to predict and respond to changes and developments in lifestyles, architecture and design, and the prioritisation of the environment and sustainability. These are the strong points that have enabled Marazzi to rise to the top of its industry, in Italy and internationally, and constantly confirm its leadership.